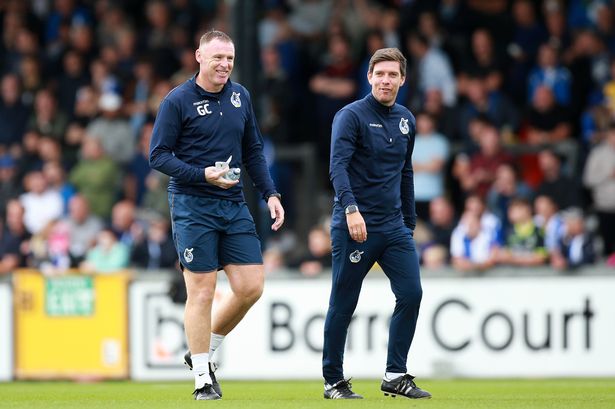 Off-the-pitch, GasCast surpassed the 50 episode mark this season, and we hope that you all enjoyed listening as much as we enjoyed making the podcast.

On-the-pitch, however, it was a turbulant season. The whole point of the podcast is to share differing views, so we thought it would be a good idea to summarise our different takes on how the 2018⁄19 season went.

After an underwhelming second half of the 17⁄18 season we made a string of signings in the summer that on paper looked great business. In practice these signings (notably Ed Upson, Stefan Payne, and Alex Rodman) failed to perform in the first half of the season. As results failed to improve, Clarke’s tactics became more adventurous, his selections inconsistent, and the squad generally seemed unhappy. Combining the bad results with a lack of progress off the pitch led to the resignation/sacking of Clarke, which I thought at the time was the right decision, and in hindsight it probably was best that he went. It was just a shame we never got to give him a proper goodbye and say thank you for all the fantastic work he had done in his time here.

The second half of the season offered far less entertaining football from Coughlan, but results improved, particularly away from home. Personally I have my doubts on the negative tactics, and the man-management of GC, but I’m willing to give him a chance to bring in his own players, given how bad the squad he inherited truly was. I enjoyed that feeling of “having my Rovers back” briefly during a spell where we scored several late goals to win vital points (vs Fleetwood, Plymouth, Bradford, Wimbledon), but still I have this strange feeling that this squad is pretty poor and has little potential outside of Holmes-Dennis and Clarke-Harris. We need a shakeup in the summer, and a big one at that if we are to compete in this league and avoid another season of struggling near the bottom.

As a 26-year-old Gashead who has endured many seasons of dross, the 2018⁄19 campaign will safely go down as one of my least enjoyable. The results have been poor, the football has been worse, and we’ve witnessed the demise of (arguably) our club’s greatest ever manager. Thankfully, the impressive turnaround under GC means that hindsight now smiles favourably on DC’s departure, but I’ll always look back on this season as a sad one for our club.

However, that’s not to decry the impact of Darrell’s successor on saving our season. To his credit, the Irishman has produced a solid side capable of picking up points from a squad overflowing with hardworking midfielders and lacking in pace, height, width, creativity & goals. And you can’t underplay the importance of his January deals on ensuring our L1 survival, with JCH in particular surely going down as one of our best ever signings? At least in terms of impact.

I have my doubts as to whether our upturn in form under GC will be sustainable next season, but I feel Graham’s earned the right to rebuild our sorry squad and try to make 2019⁄20 a more memorable campaign for us all (unless he goes to Plymouth of course, in which case, f*ck him!).

Even though we secured our League One survival, I will not remember this season fondly. At the beginning I had optimism that we would push on this year, potentially fortcing our way into an elusive play-off position, under the leadership of the legendary Darrell Clarke. Instead, things went sour and we had to let our charismatic leader go, which is a real shame and something I don’t think I’m quite ready to fully move on from just yet!

The jury is still out for me on whether Graham is the man to take us forward, aiming for those play-off positions, and whether we will ever be in a position off-the-pitch to realistically make that happen. But I hope, with this dissapointing season behind us, we can start afresh and continue to progress next season. Some news on the new stadium would always take priority for me over on-the-pitch matters currently!

This season can rightly be described as a disappointment. From the outset we were expecting a mid table finish with the possibility of a spin at the playoffs if we overachieved. I was genuinely excited by the signings we made in the summer. Upson seemed a steal from relegated MK, while Rodman and Payne on paper looked like great signings. Getting THD in was a risk that ultimately paid off (not soon enough for DC to keep his job). Even Matthews looked a good prospect.

The start of the season seemed to go well. We were ambling along until November time when it started to go horribly wrong. The squad has shown to be unbalanced and lacking in creativity. On top of that some players that were previously reliable like O Clarke and Sercombe were badly underperforming. Things weren’t helped with DC sticking to Payne/Nichols as our front two.

Getting dumped out of the cup by non-league Barnet and then losing at home to Doncaster saw DC get the sack and Graham put in temporary charge to try and keep us up. He immediately shipped out Bennet and Payne and brought in Agogo and the excellent JCH. Without his goals we would have been dead and buried a long while ago.

He came in saying that it wouldn’t be pretty and it hasn’t been. Rovers have played some horrible to watch football, however Graham has completed the job he was brought in to do and has been rewarded with a long term deal.

We can only hope that he can address the problems with the squad over the summer so we’re not back here in 12 months time. We haven’t had word from Graham about the kind of football he wants to play either. As long as its better than whats been served up this season I’ll be happy. He’ll have the fans on his back if its more of the same though.