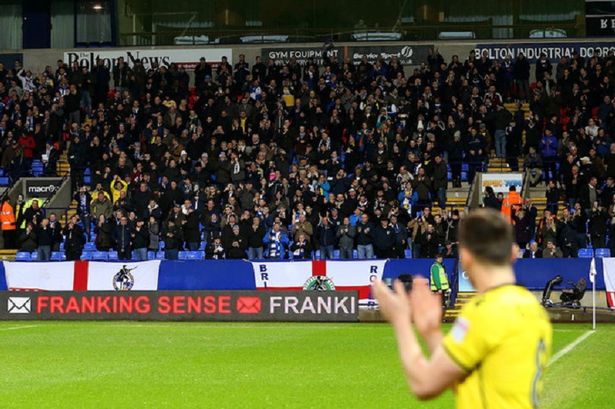 Since about the age of about seven, Bristol Rovers has had a place in my heart. I can still remember the first game I ever saw at the Mem, a 1-0 win over Shrewsbury where Lewis Haldane scored the only goal. In my first season watching, we went up and spent the best £300,000 anyone’s ever spent, on a striker by the name of Rickie Lambert. Little seven year old me thought the good times would never end (of course, this being Rovers, I was wrong.) Yet I kept on going through the turnstiles most Saturdays, moving from the stand to the terrace, going to buy a pasty or a sausage roll at half time, and hoping that each game would mark the start of the inevitable rise to world domination (I believe this fits the definition of insanity, doing the same thing over and over and expecting different results). And I carried on doing this, up until last September.

For those of you who are of a mathematical persuasion, you may have worked out that the first season I watched was 2006⁄7, which was 12 years ago. That would make me 19, and that meant I packed my bags and moved up the M6 to Manchester, where I’m a student. Manchester is a brilliant place for many things: music, food, cheap booze and football – two top teams fighting it out in the “best” league in the world compared to my upbringing in a city of two teams, founded 99 years apart, neither of whom had ever played in the Premier League. I am sorry to report that despite my best efforts, Manchester is still full of Man City, Liverpool and yes, even Man United fans. Indeed, my only criticism of Manchester is that there weren’t many Rovers games that were easy to get to as a student on a budget relying on public transport.

Sure, during the holidays when I was back in Bristol I was down the Mem all the time, but it’s a heck of a lot of football I’m missing out on, especially when my only way of keeping up with the games is streaming Radio Bristol over the internet. And because I don’t have a car, or drive, and am on a budget my options were limited in terms of awaydays. All I could hope for was that the EFL scheduled as many games near Manchester as possible in term time. By and large last year I got my wish (less so this season) – Shrewsbury springs to mind as the only game I missed last year I could have got to.

Some of the games were easy enough to get to – Rochdale on a cold Tuesday night in November may not be everyone’s cup of tea, but when you’ve persuaded a couple of mates from uni to come along to your first time watching the Rovers in a month. No matter that the most exciting part of the game was Stefan Payne hitting a thunderbolt into the bar, I was watching the Rovers again. Up next was a short hop across the Pennines to Leeds and then down to Barnsley. Again, that game was appalling (although I will tell my grandchildren about the day Stefan Payne made a wanker gesture at us travelling fans), but I was watching the Gas, my Gas!

Blackpool is an easy enough place to get to from Manchester – there’s a direct train – but the EFL conspired to put that fixture on my week off when I was back in Bristol, which turned out to be a blessing as I didn’t really fancy lining the pockets of the Oyston family. Another game that was straightforward to get to was Accrington, this time by bus. Standing on an open air terrace in freezing cold rain, with the wind lashing down watching some pretty awful football may not be for my mates who are used to watching the Premiership from the comfort of a local drinking establishment, but I wouldn’t change a thing about it (apart from the score obviously – we drew 0-0).

I had two more away days left – two of my mates had Coventry connections so four of us bundled in a tiny Nissan Micra driven by another mate from Bristol to the Ricoh to watch some more not very good football in the middle of nowhere. Finally, I had cunningly persuaded my family to take me back to Manchester at the end of the Easter holidays, a date that just so happened to coincide with Fleetwood away. Having been at the home game where Tony Craig got in the stands and Stefan Payne and Joey Barton squared up to each other I wasn’t going to miss one last chance to see the Gas in action, and I was in a packed away end to see us secure safety at Highbury.

So what’s my point I hear you ask? Well firstly, armed with a map, the fixture list and the train fares website open, it’s easier than you think to follow pretty much any team from anywhere in the country. Second, through sheer persistence, I have managed to persuade uni mates to come and watch some pretty awful football (usually on promise of a pie or pint!), and finally, if anyone else reading this fancies going to some away games they wouldn’t think of going to – go for it!