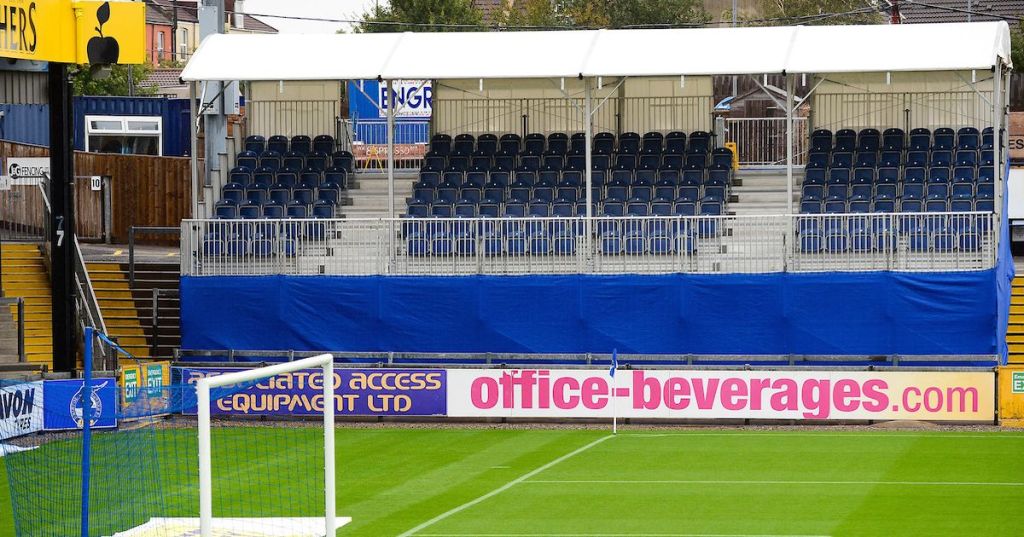 As I clicked on the ‘pay now’ button on the insanely complicated Bristol Rovers season ticket purchasing web page, I reflected on how it had come to this: I had just bought season tickets for two seats in the Family Stand.

You know the one – like a drunken Amazon purchase it must have seemed like a good idea at the time, but when it eventually appeared everyone just felt a little bit embarrassed. It would look more at home at a village fete than a football ground. It wouldn’t be in the least bit surprising to be delayed in taking our seats while they just finish up judging the Prize Marrow competition. But how had it come to this? Like a hungry vegetarian at the Mem who doesn’t like cheese and onion pasties, it wasn’t what I wanted, but I had no choice.

Until relatively recently, I had not been a regular matchgoer. Having moved close to Gloucester Road from Bristol’s salubrious Southmead area, I got fed up with watching streams of people walk past my house dressed in blue and white every other Saturday and resolved to get involved. In order that I didn’t have to go on my own, I dragged my sullen and reluctant daughter to a match one cold afternoon. We stood on the family terrace, and whilst the language was a bit of an eye-opener for a nine year old, it stayed just the right side of appalling (Family Terrace rules: F bombs only – strictly no C word). And even better than that, we won. And scored goals. And played football. To my joy, my daughter absolutely loved the experience and wanted to return. And return we did, ending up attending almost every home match until the end of the season.

Now you need to remember, these were the heady days of the pinnacle of DC’s reign, when Rovers fans were treated to highly competitive and sometimes attractive League One football. The bright-eyed offspring immediately fell for the hirsute charms of Stuart Sinclair – for two reasons: firstly because, well, he was just everywhere – he moved around so quickly that you couldn’t be certain that he hadn’t passed the ball to himself; and secondly because of his resemblance to Gimli the dwarf from Lord of the Rings. It subsequently transpired that she was right to choose Sincs as her main man – he was a fantastic professional and a great guy. I, however, very quickly had eyes for only one man. Billy Bodin: a player whose movement around the pitch was so smooth that only verbs associated with water, like sail, glide or float, seemed appropriate; a player so aesthetically pleasing that when on form you couldn’t look directly at him for fear of lasting damage to your eyes; a player so relentlessly effective that it seemed somehow unfair to have him on the pitch for the whole match – it might have been more sportsmanlike to sub him on part-way through and then sub him off again half an hour later. Even his name seemed echo through the ages as what a proper footballer should be called.

So we spent half a season standing on the family terrace before, one fateful match towards the end of the season, as Rovers were being battered three or four nil, we took the controversial decision to leave five minutes early. Walking past the entrance to the Thatcher’s End, and with the stewards gone, we popped in to check out the view from the home end, and we both realised at the same moment that this was to be our new home. The atmosphere was what drew me in – the fatalistic, humorous songs about how truly awfully the team had played. But my daughter was transfixed, in pure, wide-eyed wonder, at the magnificent scale and breadth of foul language on display. Words she never dreamed existed were bandied around with abandon and the simmering aggression was heady to behold. She even, as a nine-year-old, saw the hilarious irony of the ‘Please Mind your Language’ sign on the back wall.

So the following season we bought our first season tickets for the Thatcher’s End. We found our spot, got there at the same time each week, and enjoyed some fantastic moments. When ‘Irene’ is belting out all around you, it really is quite something – it’s a high that keeps you coming back no matter the results. The next season we did the same, but the mood soon changed. Naïve as we were, the fact that the terrible start to the season continued and became a terrible middle to the season came as a shock. We were no longer scoring goals and no longer winning games and Darrell’s selection policy started to look less ‘project based’ and more ‘completely random.’ Symptomatic of this eccentricity was the fact that the only name guaranteed to be on the teamsheet was that of goalless Tom Nicholls, the motivation behind which tactic seemed to change: at first it was perseverance with a talented player, then it became an obstinate unwillingness to admit the purchase had been a mistake. After that it began to feel like a bloody-minded ‘F*** You’ to the growing number of critics before finally beginning to resemble a cruel, psychological experiment on the player himself.

And as the mood on the terraces turned ugly, the mood in my household did likewise. There was no longer the same enthusiasm from the offspring on a Saturday afternoon that had been there before – I started having to bribe her with promises of increasing amounts of unhealthy foodstuffs and drinks. Trying to engender some real interest in the game became harder and harder until, despite the late-season heroics of JCH, the fateful day arrived when she suggested that she might not want a season ticket next time. Devastated, I scrabbled around for inducements. Short of offering her actual, unauthorised cash payments, I was struggling for ideas until she suggested that she might quite enjoy sitting down to watch a match for a change…

And thus we found ourselves at the first home match, looking for the seats that would be our home for the season. And actually I’ve really enjoyed it. The queues for food and drinks are shorter, you don’t have to turn up an hour before kick-off in order to secure a position where we can both actually see the game and we’re still close enough to the Thatchers end to get a bit of a taste of that atmosphere.

And the best thing about sitting in the Family Stand? You don’t have to look at it!