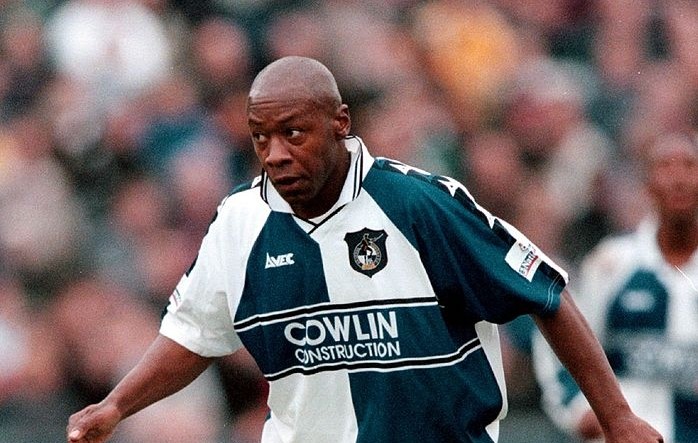 Alan Shearer, Ian Rush, Ronaldo, Zlatan Ibrahimovic, Luis Suarez, Robert Lewnadowski. All world-class strikers who have worn the number 9 shirt for club and country down the years. For many teams the number 9 shirt holds a great deal of significance; given to the star striker in the team who bags all the goals. Rovers are no exception, and with Brandon Hanlan taking up the number 9 shirt so recently vacated by Jonson Clarke-Harris, I thought it would be a good opportunity to look back at all of the players to wear the number 9 shirt since the turn of the millennium. I also decided to give them a rating out of nine (get it, cause they all wore the number 9 shirt…). So sit back and relax as we look at the good, the bad, the really bad and the downright diabolical players who’ve donned the Number 9 for the Gas.

The 1999-2000 era is often remembered for two things, firstly the end of season collapse that saw Rovers miss out on the playoffs having been top for much of the season, and the other being the wealth of attacking talent on display. This was the time of Cureton, Roberts, Ellington and Zamora. So who wore the coveted number nine shirt? Michael Meaker. The Welsh midfielder made 27 appearances for Rovers, notching 2 goals in that time. He would spend a period of this season on loan at Swindon Town. Perhaps most surprising is the fact he was still playing as recently as 2019 for Truro City. Rating – 2/9.

The former Liverpool and Rangers man was the next to don the number 9 shirt for Rovers. Having been released by Swindon in November 1999, Ian Holloway snapped up the 35 year old winger (and England one-cap wonder) to add some experience to his Rovers side. For an ageing player he enjoyed moderate success at the Gas, making 96 appearances and scoring 14 goals, however only five of these were scored whilst wearing the number 9 shirt. He retired at the end of the 2002 season, a few weeks shy of his 38th birthday. Rating 3/9

Joining from Crewe in 2002, Tait was the next player to take up the mantle of the number 9 shirt for the Gas. The first out and out striker on the list, Tait notched a respectable 19 goals in 74 games in what was a fairly dismal period for the Gas, playing in the fourth tier of English football for the first time. His spell at Rovers would prove to be his most prolific in the Football League, and he failed to recapture this form following his move to Rochdale in 2004. He slid slowly back down into non-league football, retiring in 2009. Rating- 4/9

What a player. Signed in 2003, he took on the number nine shirt when Paul Tait left. The Ghanaian international recorded an impressive 20 goals in 51 appearances in his first season as the club’s number nine. The following season he notched 18 goals in 44 games. A brilliant and talismanic forward, Agogo would go onto join Nottingham Forest, before playing in Egypt, Cyprus and Scotland. Rating- I’ve chosen not to give Agogo a score, given the nature of his passing. Let’s just say he was a true Rovers hero and leave it there.

Elite. Possibly the greatest Rovers player of my generation of supporters. Lambert was signed from Rochdale for £200k to replace the outgoing Agogo. He scored the decisive winner against the shit in his first season at Rovers, slamming home a volley which still lives on in the collective conscience (see above). In the seasons following promotion he would lash home goals from all areas of the pitch, scoring 19 in the 2007-08 season and 29 in the 2008-09 season. He moved to Southampton in 2009 before signing for boyhood club Liverpool in 2014. He would also go on to make 11 appearances for England, scoring with his first touch to head home the winner versus Scotland, a moment that left every Gashead brimming with pride. Rating 9/9.

Well this is a depressing drop off. Dickson was signed in September of 2009 on a 3-month loan from Charlton to cover the loss of Lambert. The Ghanaian international impressed early on, scoring a brace on his debut in a 3-0 win over Brentford. He would go on to score in a win against Southampton and a loss against Yeovil, however he never lived up to his initial potential and was not pursued following his return to Charlton. He is still currently playing for Hornchurch in the Isthmian Premier League, where he has a surprisingly good goal return. Rating 3/9

Another loan signing in the 2009-10 season, Heffernan took up the vacant number 9 shirt when he arrived from Doncaster Rovers on loan, where he had scored the second goal in the 2007 Johnstone Paint Trophy final. He managed a not horrific 4 goals in ten games, and had his initial one month loan extended to the end of the season. However injuries quickly caught up with him and he was recalled to Donnie. He was linked with a permanent move to the Gas that summer but ended up going to Sheffield Wednesday instead. Rating 3/9.

Well this one was just embarrassing. Signed on loan from them lot down the road, Akinde was handed the number 9 shirt for reasons known only to Paul Trollope. Akinde enjoyed miserable form for the Gas, managing to score precisely zero goals in his 18 appearances for the club, and was promptly returned to sender in January. Just an all round terrible signing. Rating 1/9

Another disappointing loan signing who wore the number 9 shirt. Rene Howe Howe was signed on loan from Peterborough by Dave Penney, in what was his sixth loan move away from the Posh. Howe managed a single goal for the Gas, netting against Oldham. His loan move was extended until the end of the season however the club decided against making the deal permanent when he was released in the summer. Rating 2/9.

Now this is a bit more like it. The big ginger forward was signed in 2011 from Shrewsbury as the Gas prepared for life in League Two. His first season saw him score an impressive 18 goals in 44 games in all competitions, however a poor start under Paul Buckle meant the Gas could only manage a disappointing 13th place finish. The following season saw Harrold suffer a serious injury which limited him to just seven appearances, however he managed to return for the final game of the season, scoring a last gasp equaliser against Torquay. The following season was a disappointment for Harrold as he managed just 7 goals in 36 appearances, as the Gas were condemned to the National League at the end of the season. Harrold managed a respectable 27 goals in 87 appearances for the Gas. Rating 7/9

The number 9 shirt remained vacant for the duration of the conference season, before being snapped up by academy graduate Ellis Harrison at the start of the 2015-16 season. Ellis managed 7 league goals in his first season as the number 9, including a crucial equaliser at Northampton as Rovers secured promotion to League One. The following season he managed a further 8 league goals, four of which came in a single match against Northampton. Emerging as Rovers main man in the 2017-18 season, Ellis would score 14 goals in all competitions as Rovers secured another year in League One. Harrison was sold to Ipswich that summer, however he could not continue his form from Rovers and moved into Pompey after one season. Ellis managed 52 goals for the Gas, of which 28 came in the number 9 shirt. Ratings 7/9

Like a man whose missus has just left him and is now going round the dance floor at 4:30 in the morning looking for anyone with a pulse, so Rovers signed Stefan Payne at the start of the 2018-19 season. Unfit and uninterested, Mr. 50/50 (presumably a reference to the 50lbs weights he tied to his ankles at the start of each match) managed a paltry two league goals in twenty appearances. Indicative of the type of low quality signings of DCs later years, Payne would be returned back to Shrewsbury on loan in January 2019, possibly with a note saying ‘return to sender, defective product’. 1/9

Now he was a striker. JCH arrived on deadline day in 2019, to what can only be described as a massive meltdown. Having scored most of the goals that kept us in the division, JCH took up the number 9 shirt at the start of the 2019-20 season. That season he managed a goal every other game ratio, scoring 16 goals in 32 appearances. He moved on to Peterborough in the summer of 2020, securing a £1m+ fee in the process. Lets hope Hanlan is an adequate replacement. Rating 8/9