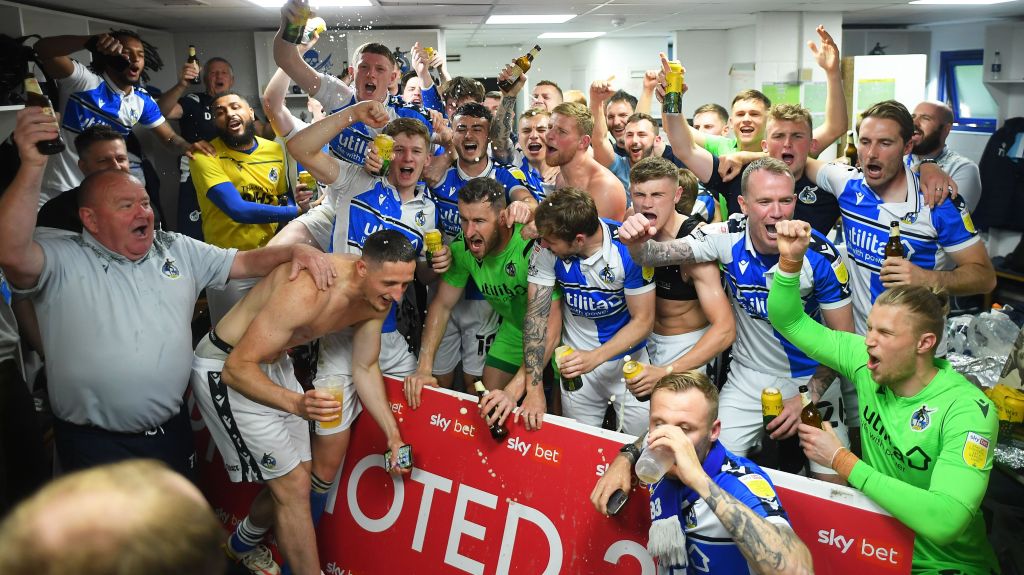 Bristol Rovers were facing the daunting prospect of a season back in the basement tier of the Football League, following last season’s limp relegation. The signs of optimism were there however, particularly after some heavy but clever summer recruitment. The likes of striker Aaron Collins, midfielder Sam Finley, goalkeeper James Belshaw and new captain Paul Coutts were brought in permanently and exciting young prospect Connor Taylor arrived on loan from Stoke.

Rovers’ first game was one of the toughest they could have asked for, a trip to Mansfield. Despite an outstanding equaliser by Cian Harries, Rovers would concede a penalty in the 94th minute and be sent home with nothing to show for a decent opening performance. The start of the season didn’t get any better either, successive home losses to Cheltenham and Stevenage made it no points from the first nine available. The Gas got their first win later in the month, a solitary goal by Harvey Saunders, enough to see off Oldham. A first 20 minute implosion by Rovers saw them soundly beaten by Exeter before a less than impressive 1-1 draw away to Barrow ended a very poor August league wise. Another win did end the month on a brighter note, a 2-0 win in the Football League Trophy.

Leon Clarke got his and Rovers season up and running after coming off the bench and taking just seconds to score as the Gas beat Crawley at home before back to back defeats against Hartlepool and Leyton Orient respectively had the Gas fans more worried about sliding to Non League than advancing back to League One. The first away win of the season ended September in dramatic fashion, Palace loanee Sian Spence stabbing home in the games final minute as the Gas came from behind to take all 3 points from Walsall.

October turned out to be a mixed bag for the Gas, beginning with another home defeat. Swindon taking the spoils in one of 9 games Rovers would end a man light this season. A 3-0 demolition of Carlisle returned the Gas to winning ways at home before a credible 2-2 draw away to Bradford included a late equaliser by Brett Pitman. Rovers made it 3 unbeaten in the league after a draw with Colchester before a home defeat to Newport halted the slow ascent up the table. October would end with the Gas recording their 5th win of the season, Nick Anderton heading home for a 1-0 away win at Harrogate.

November opened with an Fa Cup draw away to Oxford which forced a replay that looked an extra game neither side needed before a defeat in the FL trophy to Exeter which passed by without much concern to the fans. League wise, November started extremely positively, with a come from behind win at home to promotion chasing Northampton. The cup replay would turn into something of a catalyst for the Gas’ season. 3-1 down in extra time looked to spell the end before a Collins wonder strike fell either side of a Spence double to give Rovers one of the great Fa Cup stories. Two draws followed in the league. The first well earned against Tranmere but the latter felt more like a defeat as Rovers failed to deny 9 man Salford a late leveller. Runaway leaders Forest Green ensured the Gas would end November on the losing side as they marched towards what already looked like a League Two title.

Christmas season saw Rovers hit with Covid 19 and only playing the first 3 games of what looked a busy scheduled month. It opened with the Gas reaching the 3rd round of the Fa Cup with a win over Sutton before another home defeat to Port Vale left Rovers still hanging around mid table. The third game of December would ensure Christmas would be a happier one. Collins, Anderson and Evans all on target as Rovers hit 4 against Rochdale.

Despite signs of improvement, nobody could have predicted the incredible 2022 Rovers would go on to have. A narrow defeat to Championship Peterborough in the cup didn’t dampen the spirits as Rovers began their march up the table. Hartlepool were despatched at home before a well earned point away to Swindon. The final two games of January gave Rovers back to back wins. 2 late goals conceded threatened to throw away a commanding 3-0 lead away to Scunthorpe but it was held on too before Rovers did the double over Walsall, despite playing with 10 men for an hour, thanks to a late winner by Aaron Collins. January would also see the chance to strengthen the improving Rovers and two mid-season loan arrivals would prove vital in the months to come. Young centre back James Connolley was brought in to pair with fellow loanee Connor Taylor and Joey Barton dipped in to his extensive contact list, sealing the last minute loan signing of hugely talented Newcastle teenager, Elliot Anderson.

Rovers would continue their momentum in a busy February, starting with a good away draw at high flying Sutton. A disappointment away defeat to a resurgent Oldham would be one of only three more defeats the Gas would get all term. Another draw against Mansfield got a point back on the board and was the first of an incredible 4 clean sheets in a row. The second coming in a solid 2-0 win in the return game with Sutton before a thumping 4-0 away win against Stevenage. The fourth clean sheet also joined a third straight win. Collins and Evans again doing the damage as Rovers won away at Leyton Orient. Both runs were ended in the final game of the month but a credible 1-1 draw against title chasing Exeter was one well received by both teams.

March of 2016 saw a run of victories that proved vital in the promotion of that year and Rovers began this one on the front foot too. Anthony Evans’ goal of the season contender finally broken a stubborn Barrow defence to give the Gas all 3 points in the month’s opener. Rovers would be on the receiving end of that same score line the week following, losing a tight game away to Newport. An away win over Crawley got Gas back on the march – in March, before they thumped Harrogate 3-0 at home. Three wins in a row were sealed by Elliot Anderson as his goal was enough to see of Colchester. Three became four as Rovers optimism truly began to accelerate. Harry Anderson’s goal after under 30 seconds was enough to get the better over fellow promotion hunters Northampton. Not the last time Rovers would trump the Cobblers this spring! March did end with defeat to Carlisle, as it did in the aforementioned 2016 season.

The Gas picked a handy month to go unbeaten as the season reached the business end. Connor Taylor bundled a winner at home to Bradford to kick-start April before an away draw to Tranmere. Salford were next to feel the force of Rovers’ new found home form, Elliot Anderson again delivering the goods. If Rovers were to get promotion, they’re first big obstacle was that of Port Vale away, a side currently occupying the converted third spot. Despite going behind early, Rovers produced a magnificent comeback, Ryan Loft getting his first for the season late on to seal a 3-1 victory. Forest Green did what they had to do to seal promotion with a draw at the Memorial stadium before a final away game of the season up in Rochdale. With the Gas needing a win on the final day and hope results would go their way, it all certainly seemed lost as they found themselves 3-1 down to ‘Dale with 25 minutes left. What followed was a defining final spell which encapsulated what Rovers had become since the turn of the year. Aaron Collins with a superb hattrick, 2 of which coming after the 89th minute, secured a vital win and with Mansfield and Port Vale failing to win, Rovers found themselves level with 3rd place Northampton going in to the final day, 5 worse off in goal difference.

What transpired on the 7th May will go down as one of the greatest Football League stories ever told. Rovers faced already relegated Scunthorpe at home whilst Northampton travelled to 21st placed Barrow. Rovers settled their own nerves with 2 goals in the first half, only to find Northampton had already gone 3 up, leaving Rovers 6 goals behind. Barrow did score a consolation late in the half but Rovers would come out for the second half knowing they would need at least 5 more goals and a hope of good news in Cumbria. Collins made it 3 just after the break before an Evans brace miraculously had Rovers just two goals shy of a remarkable comeback. The Memorial stadium had hit fever pitch long before Collins tapped home his second for 6 and the scenes which followed Elliot Anderson’s headed 7th were unlike anything you’d ever seen. The following explosion of passion had boiled over on to the pitch and by the time the players had resumed play, the news was it that 7 goals would do. The final whistle blew to wild scenes of celebration. The most unlikely comeback resulting the most unlikely promotion! Rovers are back in League One.